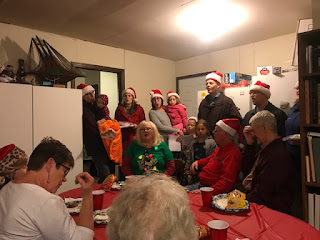 TCB had some visitors during the party! Sang songs they did a very good job!
Posted by TCB at 3:13 PM No comments: 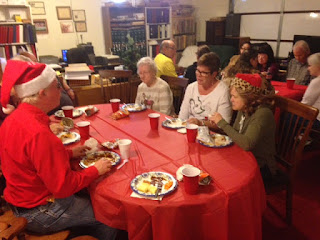 Tulsa Council of the Blind Christmas Party 2018TCB members and friends gathered at members Charley and Ruthie Tipps home inTulsa on Saturday afternoon December 15th for our Christmas party.The group numbered 18 in all! We ate first, one of our favorite things todo! As we were finishing up eating, we were surprised by a group of carolersfrom a nearby church who were friends of Ruthie's. This was a very pleasantsurprise and the group sang some really nice Christmas carols!Next came the Dirty Santa/White Elephant gift exchange game. A couple ofvery desirable musical gifts were stolen quite a few times!Attendees had a good time visiting with each other and listening to somegood music! Thanks to the Tipps for inviting us to their home for this timeof fellowship and fun! Can't wait til next year!

Yes, it is that time again! Time for our monthly TCB meeting. We will be meeting at the Mazzio’s located in the Farm Shopping Center at 5119 S Sheridan Road in Tulsa. The meeting is this Thursday evening, August 9, from 5:30 to 7:30 pm.

We will be pinning down more of the details for activities for the rest of this year, planning transportation for the OCB convention in September, and recruiting members for committees, etc.

Please join us and be a part of TCB!

The June TCB meeting was called to order by President Julie Bailey on Saturday afternoon June 23rd, 2018 at 4 p m.
The meeting was held in the Clubhouse located in the apartment complex where Jeri Cooper lives.

Secretary’s Report from Ruthie Tipps was read by David Bailey. The motion was made and seconded to accept the report as read. The motion carried.

President Julie Bailey went over the TCB calendar. There will not be a meeting in July. The next meeting will be held on the Second Thursday evening, August 9, at Mazzio’s Pizza in the Farm Shopping Center at 5:30 pm. The ACB National convention is coming up in July. A few TCB members will be going. The OCB State Convention will be coming up in September 2018 in Lawton, Oklahoma.
The motion was made and seconded for TCB to offer 5 scholarships for $110.00 for member registrations that some of the members can attend the conference. The motion carried.
Transportation to the OCB State Convention in Lawton will continue to be discussed in our next meeting. OCB is also asking for donations for the silent auction as well as door prizes.
Meeting was adjourned.
Submitted by Ruthie Tipps
TCB Secretary

THANK YOU FOR YOUR SUPPORT OF ACTIVITIES OF
TULSA COUNCIL OF THE BLIND!
www.tulsacounciloftheblind.org
WE LOOK FORWARD TO ENJOYING YOUR COMPANY!

Hope everyone is doing well and getting through this crazy weather we have been having.

I want to remind you about our April TCB meeting this Monday, April 9. We will meet at the Mazzio’s Pizza in the Farm shopping center, located at 5119 S Sheridan Road in Tulsa. If you want to eat before the meeting begins you should plan to arrive between 5:15 and 5:30 pm. The meeting will begin at 6 pm and end no later than 7:30 pm.

Looking forward to seeing everyone there!

This is a reminder that the March TCB meeting is this coming Monday, March 12. We will be meeting at our new regular meeting place, Mazzio’s Pizza in the Farm Shopping Center at 5119 S Sheridan Road. If you plan to eat with us before the meeting, please try to be there by 5:30 pm. The meeting will begin at 6 pm and we will be finished no later than 7:30 pm.

We discussed at the February meeting the possibility of taking Easter items to the St. Francis Children’s Hospital for the kids who have to be in the hospital during Easter. Jeri and I will be picking up some items from a dollar store and we will meet a day or 2 before Easter to put them together in bagts or baskets. We will let you know where we will be meeting to do this project soon so you can participate if you are able to help out.

I will be sending out an agenda soon so be sure to look it over and be ready to discuss all the fun things we are going to be doing this year! Let’s make a difference!

See you on Monday!

The new meeting place has been decided on by the Board beginning this month. Our first meeting will be at Mazzio’s Pizza, located in the Farm Shopping Center at 5119 S Sheridan Road in Tulsa.

We also have a new meeting night – we will be meeting on the second Monday of each month. Our first meeting will be next Monday on February 12.

We have once again been given the opportunity to do the pizza and pop deal. This includes all you can eat pizza and pop for a cost of $7. You can add a salad to it for a total of $9. Of course, you can order other items if you want, such as pasta, sandwiches, and salad. When you arrive at the Mazzio’s, please go directly to the counter and let them know that you are a part of the Tulsa Council of the Blind and what you are paying for. Then, after you order and pay, you can go to the meeting room. We are going to be in the same room as before. After entering and ordering, there is a ramp you can use to go up to the upper level of the restaurant. There are no steps to enter the meeting room.

Our meeting time is the same as before – we will meet between 5 and 5:30 if you are going to eat. The meeting will begin at 6 pm and end no later than 7:30 pm

Put on your thinking caps as we will be deciding what we are going to do for the year. We need your ideas and input, so please come!

If you have questions, please call or email me.

This is an FYI to all…

The Board has decided that due to the holidays and busy schedules, we are going to skip the January meeting. When a list of possible meeting places has been put together, it will be sent out to all members in order to get a concensus on where we will meet beginning in February. For the time being, Monday night has been decided on for our meetings, and we will probably go with the second Monday of each month. If it is determined that we need to meet on a different night after a couple of months of trying out Monday, we can change it.

Hope all are doing well, and we will see you in February!

Tulsa Council of the Blind

Our monthly meetings are held from 5:30-7:30 pm, on the 2nd Thursday of each month at Ollies Station Restaurant 4070 Southwest Blvd Tulsa.